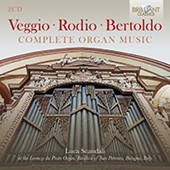 The recent untimely death of Liuwe Tamminga has deprived us of a fine organist who spent many years officiating at the Lorenzo da Prato organ in the Basilica of San Petronio in Bologna, the instrument at the centre of these two CDs of music by three little-known Italian composers from the middle of the sixteenth century. One of the oldest surviving organs, it was built in 1471-75 and added to in 1531. Luca Scandali studied with Tamminga and with the latter’s predecessor and mentor, Luigi Ferdinando Tagliavini, so he knows the instrument well and makes very good use of its full range of stops. It can make a very big sound and the Basilica’s acoustic is also big – the reverberation continues long after final chords are released – but the recording engineers have coped very well here. Scandali shows a keen affinity with his repertory, maintaining a good sense of flow while showing considerable flexibility in individual lines and sections.

Not much is known of Claudio Veggio, the earliest of the three featured composers; all his surviving keyboard music can be found in a single manuscript housed in Castell’Arquato (situated between Piacenza and Parma). Scandali plays six ricercars (one of which he has also completed), as well as an attractive canzona intabulation. The ricercars are impressive pieces, two of them quite extended in length. They tend towards imitation by homphonic blocks, rather than by single voices, and come across rather more like intabulations than ricercars.

Rocco Rodio came from Bari but worked in Naples, where he was a contemporary of composers such as Diego Ortiz, Bartolomeo Roy and Jean de Macque in what was a cultural melting pot, leading to a flourishing school of keyboard composition. His only volume of keyboard music, published in 1575, is the first known to have been printed in open score. It contains five extended ricercars, interspersed here with three fantasias on well-known plainchant themes, plus one on La Spagna. The ricercars are imaginative pieces which go in some unexpected directions. For the fantasias, Scandali is joined by sackbut player Mauro Morini who plays the long note cantus firmi. I am in two minds about this: while it does help to bring out the chant for modern audiences not familiar with it, it gives an undue emphasis to the cantus firmus, which was not necessarily intended to be heard, with the sackbut at times overpowering the other voices in the texture.

Sperindio Bertoldo came from Modena but spent most of his life as organist at the Duomo in Padua. He has left just three ricercars, more conventionally imitative than those of the other two composers here. They are interspersed with two toccatas and five French chanson intabulations. The toccatas are a particularly good showcase for full organ, while the canzonas are rich with sprightly figuration and are used to exploit its range of stops. This recording represents an attractive compilation of music by three relatively unknown figures, serving to showcase what was already a flourishing Italian organ music scene between c. 1540 and c. 1575, before Claudio Merulo and the Gabrielis came into their stride. Scandali’s enthusiasm for the repertory shines through and I enjoyed listening to it very much.