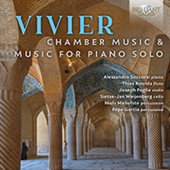 Please excuse this long introduction. Claude Vivier remains for me a composer of uncommon fascination; I first submitted to his spell in 1996 when his name was quite unknown to me. Quite out of the blue he was suddenly accorded the privilege of major label exposure with the release of a remarkable Philips collection (454 2312 - nla) of four of his works. It included his signature masterpiece Lonely Child, unforgettably delivered by Susan Narucki and the combined Asko/Schoenberg Ensembles under the late and much-loved provocateur Reinbert de Leeuw. This disc was a revelation – its release garnered very little publicity, almost as though some boardroom connoisseur somewhere wanted to keep the secret to themselves. I suspect there will be readers who are passionate about contemporary music under whose radar Vivier has completely passed; this splendid new Brilliant compilation of chamber and piano works presents a fresh and affordable opportunity to make the acquaintance of a truly poetic outsider. I will state quite unequivocally – Vivier was and is the greatest Canadian composer bar none.

There are other artefacts to seek out; an Opus Arte double DVD Rêves d'un Marco Polo (OA 0943D -available rather cheaply if one digs around) which contains staged versions of his extraordinary ‘ritual’ Kopernikus plus six other major works, including Lonely Child and an hour-long biographical documentary. There’s a marvellous biography of Vivier by Bob Gilmore, Claude Vivier – A Composer’s Life (University of Rochester Press, 2013) – if biographies are only as interesting as their subjects Gilmore has chosen well and he writes magnificently – it’s a real page-turner utterly devoid of over-academic analysis; Vivier would have scoffed at such anyway. There’s a Canadian semi-dramatised documentary/biography on YouTube- it’s weird but watchable and there are plenty of tasters of Vivier’s singular music.

Vivier was simultaneously a tortured, romantic soul and a magnetic, popular personality among his peers – Lonely Child is a telling title for a piece whose sound certainly matches his mysterious, troubling story. As Gilmore states in his preface: “There is a chilling symmetry in Vivier’s life: we do not know the exact time or circumstances of his birth, and we do not know the exact time or circumstances of his death.” The fine Brilliant note details the bare facts: he was given up to an orphanage immediately after birth and was violently murdered in his Paris flat by a malign pick-up in 1983. In between he endured a challenging adolescence and lived the life of an openly gay man at a time when such experience was habitually questioned or ridiculed. He travelled widely in Southern Asia and the Middle East and was profoundly influenced by the music he encountered during these treks.

Shiraz is Vivier’s best known piano work and has been recorded a few times. It alternates rapid mechanistic episodes requiring both stamina and extreme virtuosity – these are seamlessly blended with exotic, graceful homophonic passages of great beauty, poise and mystery. It’s an outlier in the canon, and yet it’s dazzlingly pianistic. In this account Alessandro Soccorsi’s superbly tiered dynamics certainly facilitate his convincing projection of Vivier’s vision. The violence of its opening grabs the listener by the ears; the maverick, single -minded fluency of what follows should ensure their continued focus. Hints of Messiaen, Stockhausen, gamelan and Eastern chant coagulate in a fifteen-minute piece of extraordinary variety and colour. It should be a staple of curious virtuosi everywhere but I suspect it’s gone under the radar in a way that only a French-Canadian composer’s music could. (I can certainly think of one great French-Canadian pianist for whom I’d pay good money to hear play it). In the meantime, Soccorsi’s account is excellent, arguably more poetic in its quieter moments than Louis-Philippe Pelletier on an old Pelleas disc (review) while lacking a little of the Canadian’s febrile fire in its violence. Soccorsi is also superbly recorded – no need to fiddle with volume or equaliser in a treatment that comfortably accommodates extremes of ffff and pppp.

Soccorsi is every bit as judicious in the other solo work here, Pianoforte. Harmonic implications and overtones emerge with diamantine clarity. The note references the Fibonacci-inspired mathematical processes Vivier applied to this piece, strategies often adopted by the composer’s original muse Stockhausen, but apart from the insistent pauses and some rapid episodes that approximate to Messiaen Pianoforte flows with a grace and an elegance all of its own. Remarkably, Pianoforte was conceived in 1975 as a test piece for that year’s Tremplin International Competition, as was another creation with an equally deadpan title, the Pièce for cello and piano. This displays Vivier’s trademark rhythmic unisons, a feature which makes sense for a composer preoccupied by monophony. Pièce emerges from a low drone before the piano melds with the cello in a clangorous, cataclysmic climax. The piece proceeds on a journey signposted by fragile ecstasies and more forceful, austere episodes. There is fluency and deep certainty in this engaging, poetic movement. Alessandro Soccorsi accompanies the Dutch cellist Sietse-Jan Weijenberg whose colourful playing lights up an alluring yet discomfiting piece. Brilliant’s detailed sound is again ideal. Both these pieces were new to me; neither disappoint – indeed both pack much into their brief spans. Vivier’s life was short and he left so little. Every work I encounter by this figure seems to make effortless sense.

Vivier’s travels reinforced his attraction to exotica, and the two pieces for slightly larger ensembles on this disc encapsulate these influences. Pulau Dewata is a gamelan-inspired opus which emerged soon after the composer’s three month stay in Bali. It was conceived with flexible instrumentation in mind, but as Rien de Reede suggests in his note it’s difficult to imagine how the piece would exist without percussion, as its sound world seems dominated by bells, gongs and metallic instruments. The percussion in this manifestation of the piece is matched by the piano part which only occasionally steps outside its gamelan remit. Vivier’s writing is immediately appealing, contrasting moments of ruminative stasis with more frenetic, variegated action. There is an astonishing rhythmic flexibility at the heart of Pulau Dewata – Vivier takes the gamelan influence in a different direction than did figures such as Lou Harrison or another Canadian trailblazer (and fellow Baliphile), Colin McPhee.

The disc concludes with a quartet which conveys what I would characterise as ‘sublime novelty’, Paramirabo for flute, violin, cello and piano. Why Paramirabo, rather than Paramaribo, the fabled capital of Surinam? De Reede rather vaguely implies that while Vivier may have been attracted by the exotic name of the South American city, he never visited so felt unable to use it. In any case the piece is most attractive and is once more dominated by rhythmic unison; in this case this is left to the flute, violin and cello. The piano part seems to be something of an outsider, but a friend apart rather than an enemy within. Paramirabo is intense, ravishing and accessible. It sounds like a piece which should, somehow be familiar. The instrumentalists each provide whistling textures which add to its not-of-this-world allure. The concluding vocal sigh is as unexpected as it is inevitable. Performance and recording hit the high standards of the other pieces on this terrific issue.

So, for anyone unacquainted with this exceptional, rather tragic figure, I can do no more than implore you to take the plunge. This new issue constitutes an affordable and rewarding starting point for the exploration of a powerful artist who has been inexplicably overlooked by the recording industry’s movers and shakers. Vive le Vivier!!