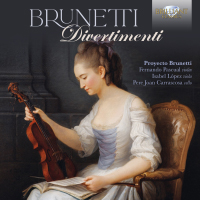 New recordings of little-known but exquisite string-trio divertimenti from the high-noon of the Classical era.
Proyecto Brunetti is a flexible ensemble formed with the aim of promoting the chamber music of Gaetano Brunetti (1744-1798). Its founder-cellist is Pere Joan Carrascosa, who has also edited the manuscripts of this divertimento collection for publication and written the authoritative booklet essay on the composer’s life and work.
The album can be considered a first port of call for anyone looking to investigate the figure of Brunetti. When they do so, they will find music of elegant gestures and appealing gentility, clear-cut melodies and subtle innovation. The greater part of his surviving music is cast in the genre of string trio which was a reliable source of entertainment for both amateur musicians and audiences in the latter half of the 18th century.
There are 47 such trios in eight collections of six (minus one in the last case), and this album presents the third such collection. Brunetti probably wrote it between 1772 and 1774 while in service to the Prince of Asturias, later to become Charles/Carlo IV of Spain. The Prince himself probably played second fiddle to the composer in those pieces scored with two violins, with the composer’s son Francesco on the cello.
Structurally straightforward, each divertimento comprises two movements cast in either a basic sonata or rondo form. It is their melodic freshness, harmonic invention and the stylishness of their writing, treating all three parts as equals, that elevates them beyond the value of ephemeral entertainment.

- The Italian Gaetano Brunetti, sadly neglected for many years, was during his lifetime a prolific composer and violinist of international fame, and a major influence both on the development of the cultural life of the courts of Charles III and Charles IV of Spain and on other musicians of his day. He left an extensive legacy of compositions, mostly for various chamber formations, since he himself performed most of the music he wrote. Brunetti was, notably, a member of the royal chapel orchestra, an ensemble that drew on the finest European musicians of the day. He also played an active part in the chamber concerts organized in the royal palace for the amusement of, among others, the Prince of Asturias: the future Charles IV.
- Stylistically, Brunetti’s work reflects the aesthetics of Classicism: he uses typical structures such as sonata or rondo form, although elements of the late Baroque and the style galant are also present. He creates melodic lines of exquisite simplicity based on small motifs and considerably embellished by means of modulations and chromatic writing. He treats each instrument equally, demonstrating a good understanding of its qualities and potential, knowledge he acquired from his experience as a performer.
- This CD presents the third series (they were collected in sets of six) of the Divertimenti for string trio: violin, viola and cello, music of great charm and wit, brilliantly written for the 3 instruments.
- Proyecto Brunetti was created with the objective of promoting the chamber music of Gaetano Brunetti, aiming to restore this key figure of European Classicism to his rightful place in the history of music. Winner of a Young Creators Award presented by the Spanish Ministry of Culture, the group is flexible in nature and is made up of violinists Fernando Pascual and Jesús Jiménez, viola player Isabel López and cellist Pere Joan Carrascosa.
More Less