Home > Catalogue > Le Nuove Musiche: A Journey Through the 20th and 21st Centuries

Le Nuove Musiche: A Journey Through the 20th and 21st Centuries 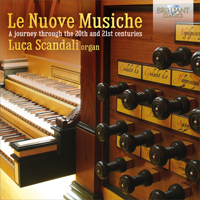 An anthology of recent compositions for organ, written during the last seven decades, is showcased here on the new Dell’Orto & Lanzini organ (2011) at the Madonna di Fatima Parish Church in the town of Pinerolo, near Turin in Italy’s Piedmont region. Yet this exiting new material is not without acknowledgement of the past, as some of the selected pieces pay homage to styles, musical languages and composers of yesteryear. Likewise the organ, though newly constructed, is modelled on those crafted by celebrated 17th-century builder Arp Schnitger, whose instruments abounded in the Hanseatic area of northern Europe during the Baroque era.

Apart from the renowned, late composers Ligeti and Eben, the music is by living authors from a variety of European backgrounds. György Ligeti’s popular Musica ricercata, from early in the Hungarian composer’s career, is represented here by three of its movements, transcribed for organ by the artist, Luca Scandali, himself. Themes by the great Baroque musician Buxtehude provide material for Czech composer–organist Petr Eben. The two youngest composers on the programme, Pier Damiano Peretti and Daniele Venturi hail from Italy, while the German-speaking pair, Jürgen Essl and Franz Danksagmüller, both studied with Michael Radulescu in Vienna. Dutch composer Bert Matter contributes a theme and variations on a 16th-century French song, and Belgian Bernard Foccroulle’s O quam pulchra es is written in the style of Baroque vocal music. Pari intervallo ushered in the beautiful ‘tintinnabuli’ style for which much-loved Estonian composer Arvo Pärt is well known. Anna Bofill Levi evokes the Costa Brava landscapes of her native Catalonia in two movements from her Six Pieces for Organ. For Watching, by post-minimalist British composer Graham Fitkin, Luca Scandali is joined by saxophonist Gianpaolo Antongirolami.

This new recording presents an anthology of organ compositions written in Europe during the last 70 years. From a stylistic point of view the new organ installed at the Parish Church of Our Lady of Fatima in Pinerolo is suitable for a variety of works: some of a derivative nature (homages to existing styles and musical languages or composers), others completely in line with the experimental nature of new music.
Included are organ works by Ligeti (from his famous Musica Ricercata), Matter, Peretti, Pärt, Essl, Fitkin, Danksagmüller, Bofill Levi, Venturi, Foccroulle, Eben: a wide spectrum of unheard sounds, sonorities, harmonies and rhythms, testing the possibilities of the Dell’Orto e Lanzini organ to the extreme!
Luca Scandali is one of the foremost organists of Italy, having studied with Koopman, Marcon, Tagliavini and Tamminga. He recorded for Brilliant several CD’s, with works by a.o. Galuppi, Pasquini, C.P.E. Bach.
The specifications of the organ as well as extensive liner notes are included in the booklet.
Full organ registrations for each track available at www.brilliantclassics.com.
More Less