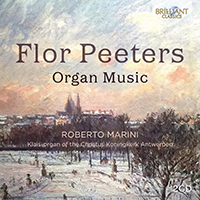 Vibrantly coloured organ music by a Dutch master of the last century, in a new recording on a magnificent Klais instrument.

Peeters, who died in 1986 on his 83rd birthday, was one of the most representative figures of the European Romantic organ school, a distinguished recitalist and sought-after teacher. He gave over 200 recitals (notably in the USA and USSR), his programmes centring on Bach, Flemish music and contemporary works. His output as a composer centred on music for his own instrument, and Roberto Marini has chosen a representative selection from a large body of work influenced as much by Gregorian chant as Flemish folktunes, as theharmonies of Marcel Dupré and by the improvisatory technique of his great friend Tournemire.

Curiously, given his established reputation, there are very few recordings dedicated to this repertoire, which is mostly excerpted in compilations. But Roberto Marini’s recital allows listeners and not only organists to grasp Peeters’ achievement in the round. A work such as the Toccata, Fugue and Hymn stretches the technique of even a virtuoso organist. By contrast, the ever-popular Aria belongs in the bench of every church organist in northern Europe.

Among the highlights here is a complete performance of the five-movement Lied Symphony, including substantially worked ‘songs’ to the ocean, the desert, the flowers, the mountains and finally the sun (another astonishingly vivid toccata). There is no presently available complete recording of the symphony, or of the expansive Vlaamse Rhapsodie, which makes Marini’s collection all the more indispensable for organ enthusiasts.

On this recording Roberto Marini plays the Klais organ of the Kristus Koningkerk in Antwerp, Peeters’ home city. The booklet includes Marini’s lucid and helpful commentary on the works themselves plus a full organ specification.

Flor Peeters was born in Tielen (Belgium), on 4 July 1903; he studied at the Lemmens Institute in Mechelen and in 1925 became the titular organist of the St. Rombaut cathedral in the same city. In 1926 he began his concert career which led him to hold concerts all over the world, becoming one of the greatest virtuosos of Europe. He dedicated a significant part of his life to teaching: first in the conservatory of Ghent (B) and Tilburg (NL), then in the Antwerp Conservatory, of which he became director in 1952.
Although Peeters composed symphonic works, chamber music and songs, it is for his Organ Works that he is mainly remembered. In these works he was inspired by Gregorian Chant and the Flemish polyphonists.
This new recording presents Peeters’ complete works for organ, consisting of the Suite Modale, the fascinating Lied Symphony, the Sinfonia Per Organo, Preludes, Flemish Rhapsody and a Symphonic Fantasy on a Gregorian Theme.
Italian organist Roberto Marini plays the magnificent Kleis organ (1930) of the Kristus Koning Kerk in Antwerp, an instrument which Flor Peeters himself inaugurated.
The booklet contains extensive liner notes on the works as well as the full specifications of the organ.
More Less