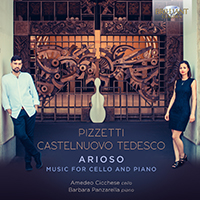 A unique but logical coupling on record: lyrical cello sonatas of ready melodic appeal, superbly written for the instrument by two 20th-century Italian composers who remained aloof from both the lure of verismo and the tenets of modernism.

Any cellist seeking new repertoire, and any listener in search of Romantic cello sonatas beyond Brahms, will alight upon this album with enthusiasm. Although Mario Castelnuovo-Tedesco (1895-1968) studied under Ildebrando Pizzetti (1880-1968) at the Conservatoire in Florence during the early years of the 20th century, their paths diverged when the Jewish Castelnuovo-Tedesco had to emigrate to the US in 1938.

Back in 1921 Pizzetti had composed a Cello Sonata thematically unified across its three movements, with an ‘agitated andanguished’ Scherzo at its heart, while the slow outer movements translate elements of medieval chant and polyphony into soulful meditations. Three years later he composed a cycle of Tre Canti – three songs more commonly encountered in the version for violin and piano but better suited to the pitch and expressive range of the cello, so closely moulded to that of the human voice. And these really are ‘songs without words’ – by turns affectionate, tender and impassioned.

The younger Castelnuovo-Tedesco was more concerned to establish a mood than to tell a story in his instrumental music, and the first movement of his Cello Sonata from 1928 is an object example of his tendency to face both backwards and forwards, artistically speaking, so that he can evoke Romanticism while simultaneously casting doubt upon its certainties and view them from an anxious distance. The album is rounded off with the delicious fantasy on the Largo al factotum and ‘Un voce po’ fa’ from Il barbiere di Siviglia which Castelnuovo-Tedesco composed in two versions, for Jascha Heifetz and Gregor Piatigorsky, having emigrated and become a fixture on the Hollywood musical scene.

Since 2015, Amedeo Cicchese has been principal cellist for the Teatro Regio in Turin, appointed by Gianandrea Noseda, but he is an assiduous chamber musician who contributed to Brilliant’s survey of the music of Louise Farrenc (BC94815) as a member of the Quintetto Bottesini, performing ‘with sensitivity and enthusiasm’ (WTJU.fm).

At the beginning of the 20th century Mario Castelnuovo-Tedesco (1895-1968) was a pupil of Ildebrando Pizzetti (1880-1968) in Firenze. Whatever musical affinity there was between the two their personal situation couldn’t have been more different: Pizzetti was a dedicated supporter of the Fascist regime, which eventually led to the forced emigration of Castelnuovo-Tedesco, a Jew.
The two composers preserved throughout their creative existence the common intention to free music from subordination towards the Opera, above all the Verismo, which dominated Italy at the beginning of the century. The music of Pizzetti and that of Castelnuovo-Tedesco originate from the song, from the vocal melody, and from the wavering and rhythmic gait that is typical of the sound of the Italian language.
This new CD present music for cello and piano of the two composers: their two Cello Sonatas and shorter pieces for cello and piano.
Played with great intensity and warmth by two Italian soloists: cellist Amedeo Cicchese and pianist Barbara Panzarella.
More Less