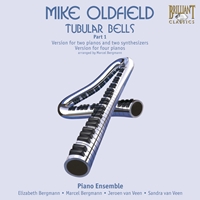 Oldfield does not compose ‘serious’ music and as such is not a part of the ‘classical’ world. But his work is inventive and does sound good. And it has some similarities with minimal music, which still enjoys increasing popularity. So much so that Oldfield’s best-known composition, Tubular bells, were played during the coming Rodeo 2008 Festival in Calgary, Canada, this January.

Pianist Marcel Bergmann arranged Tubular Bells for multiple keyboards a couple of years ago. His version for four grands was played in Canada and is recorded on this CD as well. Together with a ‘cheaper’ version replacing two of the pianos with two synthesizers, both shed a different light on the music.

Performers are the arranger Bergmann and his wife Elizabeth. They are joined by the Dutch couple Jeroen and Sandra van Veen, who are great promoters of minimal music for piano(s) internationally. If you did not have the opportunity to attend one the performances in Calgary, listen to this CD.