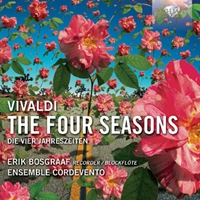 Vivaldi’s Four Seasons is one of the world’s most popular and widely recorded collections of music, a set that instantly became an international hit after it was first published at part of the composer’s Op.8 in 1725. No doubt it was its imitative directness – extra musical occurrences/phenomena evoked in an extremely suggestive manner and even written into the score, such as ‘the barking dog’ or ‘the drunkards’ sleep’ etc. – that caused such as sensation in its time, effortlessly bridging the gap between the salons of the highborn and the alehouses of the lowly. Today nothing has changed: the concertos are performed both by great violin virtuosos and famous hard rockers; they are works that are constantly being presented in new guises through the re-imagining and re-working of the musical score.

Such is the standpoint adopted on this recording by Erik Bosgraaf, who has chosen here to adapt the violin part for recorder, explaining how ‘the violin part can be played on the recorder with surprising ease, without many changes. In some ways it works even better than concertos Vivaldi wrote specifically for the recorder!’ Years ago Bosgraaf performed The Four Seasons with a symphony orchestra; for the present album, however, he wanted to approach his ideal as closely as possible using Cordevento, a small baroque ensemble he founded himself, knowing all the musicians through and through. Bosgraaf’s aim is to make the four legendary concertos sound as if they had been written for the recorder in the first place – and the results are laudable, with the contrasts between the wind instrument and the accompanying strings revealing previously unheard stratifications and details. As the soloist himself puts it, ‘Listen to Vivaldi with fresh ears and enjoy!’

Other information:
- Recorded 25–28 June 2013, Kruiskerk Burgum, The Netherlands.
- Erik Bosgraaf is considered one of the most innovative and versatile recorder players of his generation. His concerts are happenings, and offer fascinating combinations of classical and experimental music. His importance for the emancipation of the recorder (still often considered a stuffy and even childish instrument) is enormous.
- Bosgraaf’s version of Vivaldi’s Four Seasons (of course originally for violin and orchestra) is not a mere transcription for another instrument, but a recreation of a work of startling originality and power: listen to the furioso rendering of the Summer Storm!
- Bosgraaf’s earlier recordings for Brilliant Classics have met with enthusiastic acclaim in the international press; this new album will strengthen his reputation as one of today’s most fascinating out-of-the-box artists.
- Contains detailed notes in English, German and Dutch on the music and matters of interpretation.
- Contains the Four Seasons’ sonnets.
More Less